It’s 2019, you’ve probably heard the words “renewable energy” multiple times, maybe you even hear them multiple times a day. In case you’re still unsure of what they mean, we’re talking about energy that is collected from renewable resources, such as rain, wind, sunlight, and so on. Renewable energy can be used to generate electricity, heat/cool air and water, and help power various forms of transportation, all in socially responsible ways. Renewables can even help expand energy access because they are often used in rural areas where it may be difficult to get power from more traditional grids.

One form of renewable energy that is becoming a major power source across the globe is solar. You can use solar energy in passive ways, like orienting a building to the sun and designing interior spaces that naturally circulate air, or in active ways. An active example of solar technology is solar power, which is electricity that has been converted from sunlight. In 2011, the International Energy Agency said that "the development of affordable, inexhaustible and clean solar energy technologies will have huge longer-term benefits. It will increase countries' energy security through reliance on an indigenous, inexhaustible and mostly import-independent resource, enhance sustainability, reduce pollution, lower the costs of mitigating climate change, and keep fossil fuel prices lower than otherwise. These advantages are global. Hence the additional costs of the incentives for early deployment should be considered learning investments; they must be wisely spent and need to be widely shared.”

By 2016, solar generated 1.3% of global power and was the fastest-growing source of new energy worldwide. According to the Global Trends in Renewable Energy Investment report released this month by United Nations Environment, the Frankfurt School-UNEP Collaborating Centre, and Bloomberg New Energy Finance, $160.8 billion was invested in solar power in 2017, which is up 18 percent from 2016. This means solar power generated more money last year than any other type of energy, including new coal and gas projects, which generated about $103 billion.

Solar electricity, as well as some other renewable technologies, are improving with time and are becoming more affordable. People, even some politicians, are becoming more and more interested in using renewable energy while speaking out against things such as offshore drilling, nuclear power, fracking, and coal mining. Renewable energy can now help countries by supporting economic growth, creating more jobs, limiting carbon emissions, and reducing air pollution. China has definitely caught on to the benefits of solar power.

According to a Mother Jones article that looked at the Global Trends in Renewable Energy Investment report, “China created more than half of all new global solar capacity, and accounted for 45 percent of the $279.8 billion spent worldwide on all renewables.”

China has begun to set goals and make plans that address climate change with the knowledge that renewable energy can help them. The country is actually responsible for a lot of solar manufacturing. It’s important to note that not only is China the most populous country, it’s also the world’s biggest CO2 emitter. This solar boom in China might be influenced by the fact that their air quality is terrible due to pollution. Renewable energy is a solution to a problem that is, for this country, already very tangible.

Unfortunately, the numbers on renewable energy in the United States are dropping, but not enough to signal a trend change or cause major concern. The US is still the second fastest-growing market, after China, when it comes to renewables. The 2017 numbers might have something to do with how much President Donald Trump advocates for reviving the coal industry. At this point, the Trump administration has even imposed a tariff on solar panels. However, experts in the renewable energy field are guessing that, unlike in some industries, many solar companies may just pay the tariff whether they want to or not in order to continue on with their work.

Here at InTrack we, as well as many of our clients, firmly believe in the concept of socially responsible investing, impact investing, and renewable energy. Myron Sopher, our founder managing partner, is a Chairperson at Northern Reliability, which provides power derived from sunlight, wind, and conventional fuel sources, as well as energy storage solutions. He has also invested in renewable energy startups and solar power companies over the years. Myron’s house in Charlotte, Vermont has solar panels and his garage has Tesla Powerwalls for power backup. 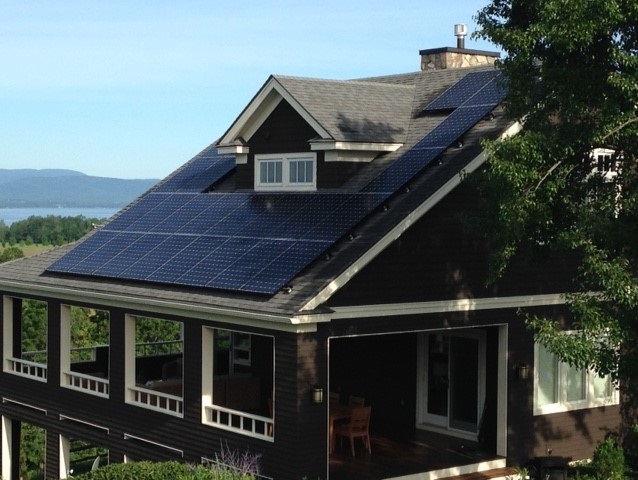 “I strongly believe, and have for years, in sustainability,” Myron said when asked about company values. “At the end of the day, I want to make sure that whatever I do, I have an impact on our environment. I like to act with my investments and my thoughts rather than being a non-participant.”

In regards to solar power, Myron doesn’t just think it’s a sustainable energy source, but also a smart one. For example, he doesn’t see electricity getting any cheaper in the future. If anything, he thinks those numbers will keep going higher and higher.

“Solar will rapidly replace many of the fossil fuel utility companies out there,” Myron predicts. “I think, in the future, every homeowner will have a better chance of selling their property if they have a solar component."

In fact, similarly to Myron, Jan and Brett Peltzer, who are also InTrack partners, have invested in the solar panel field in St. Johnsbury, Vt. In addition to personal investments in solar, InTrack, as a company, has invested in that same solar panel field and was awarded a USDA Rural Development Grant. We worked closely with another local company, Solaflect, which is a Vermont based developer, manufacturer, and installer of dual-axis tracker mounted photovoltaic solar panels. Last year, at a community event, Myron shared his perspectives on influencing and creating positive environmental change through investing decisions. Bill Bender, Solaflect President, also spoke about the benefits of solar power at the event.

Myron emphasized that solar panels don’t need to be obtrusive. With more community involvement, despite the worries of available land and financials, panels can be placed appropriately, and sometimes even attractively. Myron thinks it’s unfortunate that there are so many examples of ugly solar and upset communities, which really gives a beautiful thing a bad reputation. Overall, we love the direction renewable energy is heading here in Vermont, across the United States, and beyond.