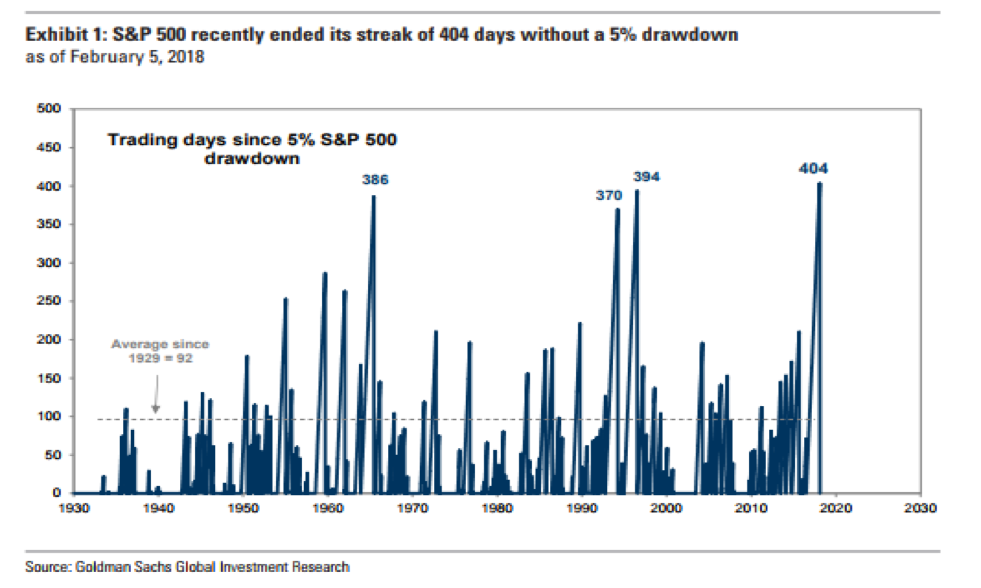 Thoughts on the Recent Market Correction

Our goal in putting these thoughts together is to give everyone a historic understanding of the correction that occurred during the past two weeks, whether it has further to go, and answer the most important question, is this the start of a bear market?

The stock market recently ended its streak of 404 days without a 5% or more correction. This is the longest period without a correction in 90 years, see chart below. Since 1929, 5% corrections occurred on average at least every 92 trading days. The market decline reached 11.8% on Friday from its recent high on January 26th. This happens to be very close to the median correction in the market over the past 90 years.

Market experts have tried to point to a single trigger for the sell-off, but no single catalyst sparked the decline. The latest update on the job market a week ago reported an acceleration in wage inflation. This raised the prospect of faster than expected Fed tightening of short-term interest rates. The timing of this report coincided with the period when companies are not permitted to repurchase their shares in the open market. This period begins a month ahead of their earnings reports. Roughly 45% of S&P 500 companies have not yet reported their 4th quarter earnings thus prohibiting them from buying their shares. Companies repurchasing their shares was an important source of demand for stocks in this bull market.

Most equity market corrections recover without developing into bear markets or presaging recessions. Of the 16 selloffs of 10%+ since 1976, only five were associated with a recession. The S&P 500 typically declined by 15% during the 11 corrections not associated with a recession. Normally a correction lasts approximately three months and then the market rebounds to a new high within four months. What is unusual is the speed of the market’s decline. There is no doubt that automated selling by computerized trading systems or ALGO’s, as they are called, accelerated the decline. The market went up faster then it should thanks to the computerized trading programs in January and also came down faster with their help.

It was encouraging that Friday’s market stopped going down and reached a level when buyers traditionally have come back in. Also, on Friday the stock market was down almost 2% at the lows in the early afternoon and turned around and closed up 1.4% which was also the high for the day. This was the opposite of what was occurring over the past two weeks when the market was selling off and ending the day at the lows for the day. This reversal on Friday is sometimes a signal that a short-term bottom has occurred.

The S&P 500 was down 5.1% this past week. Utilities were the best-performing sector (-2.6%) while energy was the worst-performing sector (-8.4%). The riskiest segments of the market; materials, technology and financials sold off more and the less risky segments such as utilities, telecoms and real estate less so. This is shown clearly in the chart above, prepared by Goldman Sachs.

In summary, we would like to leave everyone with the following points:

· The stock market could sell off another 3% based on history and this could occur in the next month or so. It is also likely the market will trade between that eventual low and the recent highs on January 26th for a few months before the market attempts a new high. Investors who bought at the highs will most likely sell on any rally in the next few months. This sideways movement will further frustrate the Bulls and help correct the over-enthusiasm.

· The market will become more volatile during this time frame as interest rates continue to move slowly higher.  The higher level of volatility is normal going into the late stages of a bull market and in a rising rate environment.  The leadership of the market will also probably change during this transition.  InTrack will focus on the segments of the market which benefit from rising interest rates (financial and material stocks) and rising spending by companies (technology an industrial stocks).

· A bear market still does not appear to be on the near-term horizon and thus the market sell-off should not go much further.  The typical triggers for a bear market are not yet present; high interest rates, a recession or a geopolitical crisis. ISI’s surveys of economic activity here in the U.S. and overseas recently hit new highs for the past two years.  The level of their U.S. survey’s is consistent with a 3.5% U.S economic growth rate.  To use a baseball analogy, the U.S. economic recovery might be in the seventh inning, but the global economy is only in the second or third inning of a recovery.  A geopolitical crisis is possible but nearly impossible to predict.

· Interest rates will continue to rise in the U.S. as the Federal Reserve raises short-term rates another 0.50 to 1.0 % by year-end. Due to inflation accelerating, rates on longer term bonds will rise. Ten-year U.S. treasury rates are currently at 2.85%. Before the last recession started, this rate rose to over 5%. It is important that interest rates do not rise rapidly or more than expected.  The U.S. also has a new chairperson of the Federal Reserve. The market usually likes to test a new Fed Chair early in their tenure. How Chairman Powell reacts in the months ahead will be very important. While the U.S. has started to raise interest rates, the Central Banks of Europe and Japan recently stated that they will not start raising interest rates this year. This will provide support for global stocks.

· Profits of U.S. companies are expected to rise by 14% this year with 5% of that growth a result of the recently passed corporate tax cuts. This level of growth, year over year, is three times the normal rate of earnings growth. Profit growth next year is also expected to be better then average due to the improving global economy and tax cuts. Therefore, the earnings picture is still positive and should allow stocks to move higher after the correction. The market will not move up as much as the superb earnings growth because interest rates are increasing. As rates rise investors are willing to pay less for those earnings.

· The other signals you would normally see before a bear market are not occurring during this sell off. Usually the interest rates risky companies pay on their bonds rise compared to U.S. Government Bonds. There is no sign that this has started. Also, if a bear market was approaching, wage inflation accelerates rapidly and the global economy has run out of capacity to produce more goods.

If you have any questions or comments, please don't hesitate to give us a call at (802) 649-1666 or email us at info@intrackinvest.com!