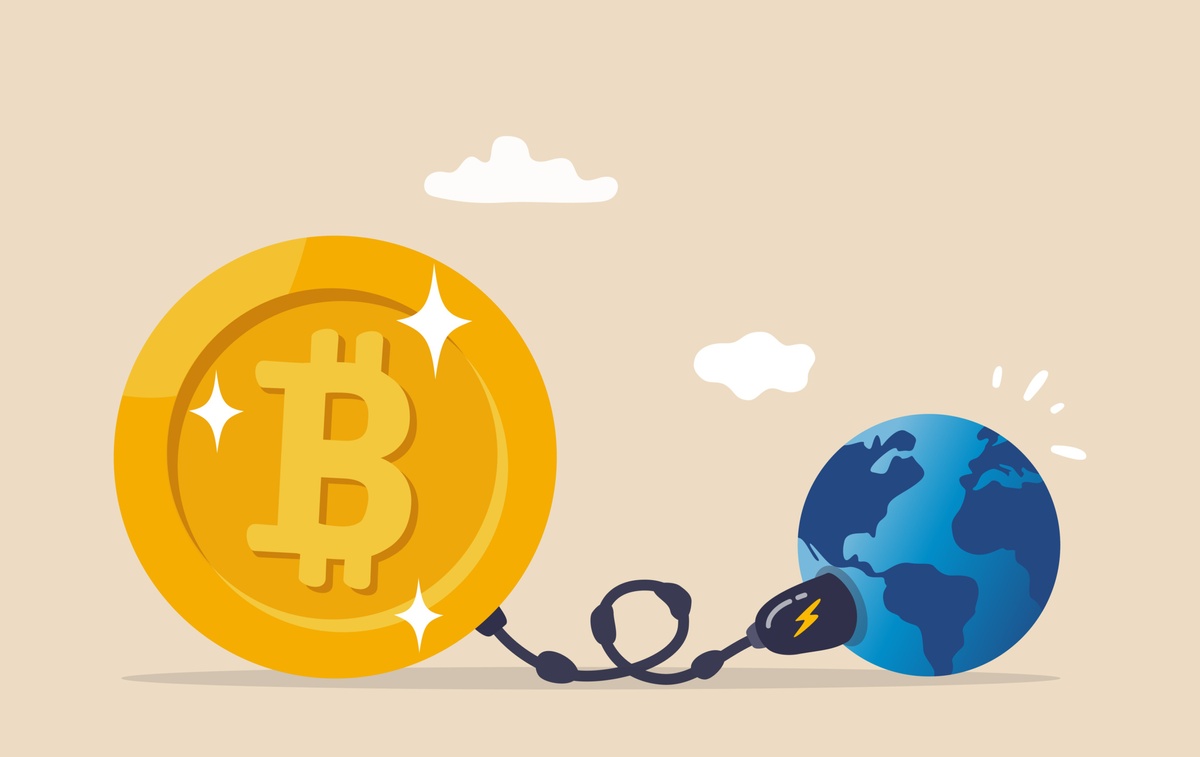 What ESG Investors Should Know About Bitcoin

If you’re someone that keeps up with the news, you’ve probably seen your fair share of cryptocurrency-related headlines. Opinions on these cash-like electronic payment systems range from game changing, or at least intriguing, to unstable or even unethical. One of the most popular, and therefore most widely discussed, cryptocurrencies is Bitcoin.

Bitcoin was created in 2008 by an unknown person, or possibly persons, going by the name Satoshi Nakamoto. Their original proposal explained that because the ultimate supply of Bitcoin will be limited, growing demand over time would turn this concept into a valuable currency. Although Bitcoin took years to gain enough interest, the idea did work. Today one Bitcoin is worth about $50,000. The criticism of Bitcoin being unstable is valid, however, so that valuation could, and often does, change at a moment’s notice.

Wondering how Bitcoin transactions work? Understandable. They’re certainly hard to conceptualize since there are no physical bills or coins associated with the numbers.

The first step is to open an account with a Bitcoin exchange, such as Coinbase, which lets you purchase Bitcoin with dollars. This essentially creates a “digital wallet” for the account owner, which now holds their purchased Bitcoin. The owner can spend their Bitcoin by sending it into the digital wallet of the person they want to buy something from. We’ll refer to that person as a seller.

From there, the transaction must be validated by the Bitcoin network before it goes through. This occurs so that the seller can be assured they are being paid with the real deal. This public ledger process is the system’s form of security.

So, Bitcoin has at least proven itself to be legitimate, valuable, and secure, but is it something for ESG investors to consider adding to their portfolios? In terms of social and governance criteria, there are some positives. The point of creating Bitcoin was to cut out the middlemen, such as banks and credit card networks, who are present in traditional currency systems. These middlemen can exercise control over who’s allowed to use their financial networks and what the networks may be used for. By eliminating them, the Bitcoin system spreads power amongst its users, instead of asking them to trust a single person or entity with all the power. The security and privacy provided by Bitcoin are particularly attractive features to users who live under oppressive regimes. Although middlemen are typically in place to keep people and their money safe, it’s fair to say that not all of them can be completely trusted.

On the other hand, these same features make Bitcoin an ideal currency for funding nefarious activities. Some crimes that are already associated with Bitcoin include money laundering, buying illegal drugs, and orchestrating ransomware attacks, just to name a few. However, it can be argued that conventional cash is still used to commit crimes far more often.

Despite the relatively pure intentions that fueled Bitcoin’s creation, there is something that ESG investors absolutely should not ignore, and that is the environmental impact. For starters, creating new Bitcoins uses an astounding amount of energy. This is due to a process known as “mining.” A miner begins the process by using a computer to play a guessing game, like dice. This game is designed so that it always takes an average of 10 minutes for someone to win a round. Therefore, the more people that are playing, the more difficult it will be to win. The winner is the first one to validate a standard “block” of Bitcoin transactions. Their prize is 6.25 newly minted Bitcoins. Considering their current value, you can imagine how serious the competition is. The way a miner can give themselves a real advantage is through computer power, which enables more guesses to be made in less time.

You might be wondering why this game needs to be so complicated, and there is a good answer for that. It’s part of how the Bitcoin system is set up to ensure that only “trustworthy” computers are recording transitions in the public ledger. If the game were easier, it would be easier for a bad actor to scam other users. With the system set up the way that it is currently, it makes more sense to spend the time, computer power, and money on mining than on hacking.

The problem is that the powerful computers used to mine Bitcoin these days require a shocking amount of electricity to get the job done. Recent stats that have been reported by major news outlets are absolutely mind blowing.

In the beginning, when Bitcoin was less valuable and there were fewer miners, anyone with a home computer could participate in the validation game. Now, miners need specialized, expensive machines and enough space and cooling power to keep them from overheating. As mining has become more popular, and as a result the game has become more difficult to win, the amount of energy used to create new Bitcoins has skyrocketed over time. Specifically, the usage has increased by tenfold in the past five years. There are now warehouses full of these machines that are owned by companies or groups of people instead of single miners. Bitcoin has essentially turned electricity into security. While that might be good for their system, it’s terrible for the environment.

It’s also worth noting that Bitcoin mining creates a significant amount of electronic waste. According to Paris-based economist Alex de Vries, approximately every year and a half the computational power of mining hardware doubles. This makes older machines obsolete, so miners go out and buy the newer, faster options. What do they do with all their old computers? Unfortunately, they often aren’t even disposed of properly. Digiconomist reported that the Bitcoin network generates between eight and twelve thousand tons of e-waste every year.

When it comes to Bitcoin, it’s still too soon to predict anything with full confidence. Regardless, before buying their own stash of Bitcoin, ESG investors should do their research with the information that is currently available. You could also consult your financial advisor to assess if investing in cryptocurrency would both align with your values and help you achieve your goals. If you care about adhering to environmental criteria, it would be hard to find a cryptocurrency that is right for you. There are some with alternate, potentially more efficient bookkeeping systems that the bigger players could adopt in the future. However, considering the success Bitcoin is seeing as is, it’s unlikely that they will switch things up any time soon.